The Good Florist Guide re-launches and were part of the Advisory Panel!

I was delighted to see the relaunch of The Good Florist Guide last week, especially because now I can make a song and dance about the fact that I’ve been asked to join its advisory panel!

The Good Florist Guide aims to be the equivalent to the Good Hotel Guide or Good Pub Guide, offering its users independent advice on the best florists in their area.  Completely merit-based, the florists who gain accreditation do so because of their skills, passion and commitment to standards of excellence.

It’s a brilliant initiative to strengthen professionalism within the floristry sector by promoting best practice, so you can imagine I was falling over myself with enthusiasm when not only were we approved for membership, but personally asked to be part of their advisory panel!  What an honour.  It’s the brainchild of Caroline Marshall Foster who is editor of The Florist, an industry magazine that I have read avidly since I was a trainee florist 17 years ago.  Her asking me to get involved is the stuff dreams are made of and beyond flattering.

Alongside Philip Holley (Willow Floristry in Dorset), Leslie Nash (Jennifleurs in Colchester), Nikki Meader (West Malling Flowers in Kent), Karen Massey (Fleurtatious in Dublin) and David Costa (Flowers Unlimited in Brighton), I will help shape the guide, give my opinion on the role it plays in the industry and ensure the site works hard for its members.  I am (geekily) passionate about the floristry sector and am the first to champion any initiative that looks to improve the quality of flowers, ranges and services we can provide.

Aside of giving The Flower Lounge presence on a national scale, it also allows me to fly the flag for the North too.  It’s so important that the needs and voices of the many, many talented florist professionals beyond the Watford Gap are heard as we face additional challenges specific to our region.

The new website launched last week to coincide with Chelsea week, but we’ve known about it for some time, as one of the initial tasks as advisory panel was to review, test and feedback.  I was very excited to be one of the first to view it and can see the huge potential for it to become a nationally recognised brand, a go-to service when people are looking for flowers.  There are currently already 350 vetted members, including us (!), and despite its 3-year lull, The Good Florist Guide has a reputation and influence spanning over a decade, since its conception as Master Florists in 1999.

You can read more about the panel here and the relaunch here.  I feel privileged to be involved in such a fantastic project, part of such a skilled panel of florists and overwhelmed to be recognised as a key player in the floristry sector. A high five moment. 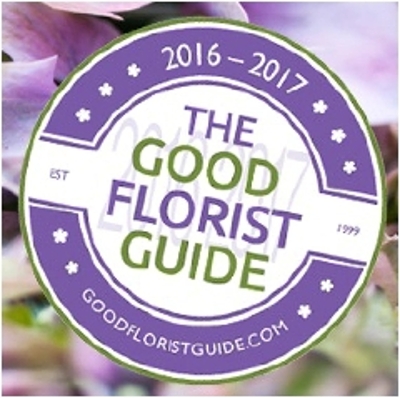